This milestone on the road to commercial zero-emission flight is part of the HyFlyer project, a sequential R&D program supported by the UK Government and follows the UK’s first commercial-scale battery-electric flight, conducted in the same aircraft in June.

ZeroAvia will now turn its attention to the next and final stage of its six-seat development program—a 250-mile zero emission flight out of an airfield in Orkney before the end of the year. The demonstration of this range is roughly equivalent to busy major routes such as Los Angeles to San Francisco or London to Edinburgh.

While some experimental aircraft have flown using hydrogen fuel cells as a power source, the size of this commercially available aircraft shows that paying passengers could be boarding a truly zero-emission flight very soon. All of the team at ZeroAvia and at our partner companies can be proud of their work getting us to this point, and I want to also thank our investors and the UK Government for their support.

Intelligent Energy will optimize its high power fuel cell technology for application in aviation while EMEC, producers of green hydrogen from renewable energy, will supply the hydrogen required for flight tests and develop a mobile refueling platform compatible with the plane.

In addition to all the aircraft work, ZeroAvia and EMEC have developed the Hydrogen Airport Refuelling Ecosystem (HARE) at Cranfield Airport—a microcosm of what the hydrogen airport ecosystem will look like in terms of green hydrogen production, storage, refueling and fuel cell powered-flight. This also marks another first—a fully operational hydrogen production and refueling airport facility for primary commercial aircraft propulsion. 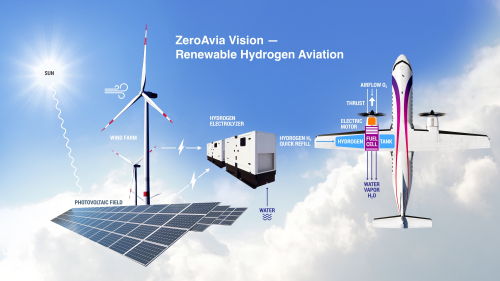 ZeroAvia’s hydrogen-electric powertrain is projected to have lower operating costs than its jet-fueled competition due to lower fuel and maintenance costs. The company plans to control hydrogen fuel production and supply for its powertrains, and other commercial customers, substantially reducing the fuel availability and pricing risks for the entire market.

HyFlyer will demonstrate a phased approach from battery power to hydrogen power, integrating the new technology aboard a Piper M-class aircraft, which will perform initial test flights out of Cranfield and culminate in a 250 – 300 nautical mile (NM) demonstration flight out of an airfield in Orkney.

Leakage of iron-rich groundwater in a cattle pasture. The red color comes from a mixture of oxidized iron and carbon compounds, which are highly reactive...

Credit: Christopher Roos Wildfires are the enemy when they threaten homes in California and elsewhere. But a new study led by SMU suggests that people...

Global Forest Watch's satellite-based maps provide users with access to data on forests worldwide - and are an important tool in the fight against forest...