Audi is adding a new member to its A3 family: the A3 Sportback 30 g-tron natural gas vehicle. Operation with natural gas or biomethane makes the compact model economical and more climate-friendly with low emissions. Sales in Germany and other European countries begin in fall 2020 at a base price of €30,705.88. Audi first introduced an A3 Sportback g-tron in 2014.

The A3 Sportback 30 g-tron 1.5 TFSI engine produces 96 kW (131 PS) and generates 200 N·m (147.5 lb-ft) of torque between 1,400 and 4,000 rpm. Its turbocharger with variable turbine geometry makes optimal use of the exhaust gas energy for early and harmonious torque development. The Miller combustion process provides consumption advantages during normal driving. With its abbreviated compression phase and long expansion phase, it was designed specifically for operation at partial load. 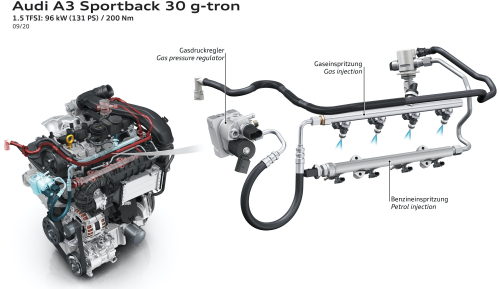 Operation with the knock-resistant fuel CNG enables a higher 12.5:1 compression ratio compared with the conventional combustion process of the 1.5 TFSI 110 kW (150 PS) and also improves efficiency. The cylinder head, injection system, turbocharger and catalytic converter were modified accordingly for the CNG engine. Before the gas reaches the injector valves, an electronic pressure regulator reduces the pressure from as much as 200 bar, which can prevail in the tanks, to between 5 and 9 bar. 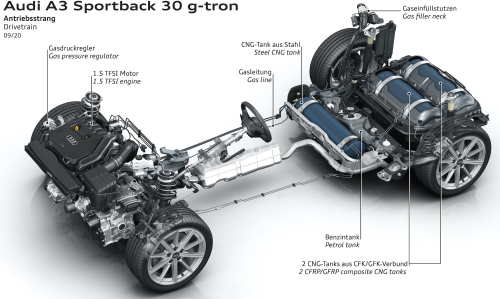 The four-cylinder always starts in CNG mode, only injecting slight amounts of gasoline under rare operating conditions. If the pressure in the gas tanks drops below a certain threshold, which varies depending on the current driving state, the engine switches to gasoline mode. The driver does not notice this switch. The fuel level in the tanks and consumption in the respective operating mode are displayed in the digital instrument cluster. The two filler necks are placed under a common fuel flap.

Three CNG tanks arranged perpendicular to the direction of travel are located in the rear of the Audi A3 Sportback 30 g-tron. A narrow steel cylinder with a capacity of approximately 4 kilograms of gas is mounted in front of the gasoline tank. Two large tanks, each of which can hold approximately 7 kilograms of CNG, are located beneath the luggage compartment floor. They are made of fiber-composite materials and, in keeping with Audi’s lightweight construction philosophy, each weighs just 26 kilograms (57.3 lb).

The inner layer is a gas-tight polyamide vessel. The ultra high-strength outer shell comprises two layers: an inner layer of carbon fiber-reinforced polymer (CFRP) and an outer layer of glass fiber-reinforced polymer (GFRP). The GFRP layer also has a safety function: It turns a milky white if damaged. A cover likewise made of GFRP protects the tanks against stone impacts or other road influences.

Before the tanks are mounted in the car, they are pressure tested at 300 bar, far above the operating pressure of 200 bar. The vessels withstand a burst pressure of 580 bar, which is also well above the 470 bar required by law. Crash tests requirements are also easily met.

Lower costs, lower emissions. The Audi A3 Sportback 30 g-tron is also a leader when it comes to economy, in part because of the favorable tax rate on natural gas and biomethane in Germany until 2026. The emissions balance is similarly positive. Due to the fuel’s high hydrogen content, a CNG automobile emits approximately 20% less carbon dioxide than a comparable gasoline model.

There are currently some 850 CNG gas stations in Germany. More than half of them sell biomethane produced entirely from waste, and this number is increasing. With this fuel, driving is nearly climate-neutral. When the fuel is burned in the engine, it only releases as much CO2 as the biomass from which it was produced bound while growing.

Audi is helping to further increase the share of sustainable methane in the gas mix by feeding Audi e­gas into the natural gas network. The synthetic fuel is produced at the power-to-gas plant in Werlte from water and carbon dioxide using electricity generated by wind power. Audi sources the CO2 from an adjacent biogas plant that recycles agricultural waste. The power-to-gas plant in Emsland is both a research facility and production site that also serves to stabilize the power grid in light of the increasing share of fluctuating green electricity from wind and solar power generation.

Avoiding the congestion chaos left by the pandemic